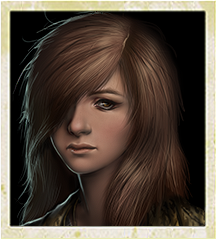 Aggro Moss is a musician with a laid-back and somewhat detached personality. She used to play in a band with her ex, Alan, who was also her manager and waited in a bar for him to return. Her real name is Agatha and earned her nickname from her former bandmate after she was caught with Alan and assaulted her.

Aggro's life was a chaotic mess from the moment her mother remarried for an unspecified reason. Going from the laid back nature loving woman that accepted Aggro's lifestyle of rock and roll to being a born again Christian who rejected Aggro's lifestyle, Aggro chafed under her mother's new lifestyle. As soon she had secured a record deal with an indie company she went on tour with her band and gotten into trouble ranging from bar fights, increased smoking habits and marrying Alan, her manager/band mate. Her marriage came quickly to an end when she catches him with another band mate in bed. While Aggro had a divorce, she still performed with Alan as they toured around bars. It was at the Dublin bar when the zombie apocalypse hit the motel they were at and they went to the bar while Alan looked for help.

Note: Aggro will die if she is not recruited before Day 41 (June 2nd).

Aggro can be found in the "Dublin Bar" near Stephenville. If you have Lane Vibesit in your party, he'll recognize her, and be really enthusiastic to have her join the Shelter. However, if you're aggressive with her, she'll attack you, and if you refuse to take her along when Lane is in your party, he'll leave the Shelter and go with her instead unless you have 4 Leadership.

Aggro's skill progression focuses first on her Mechanical and Melee abilities, then slowly build focuses on Survival, Medical, Leadership, and Ranged. Her stat progression is Agility, Vigor, and Perception.

Aggro is halfway decent melee fighter, and the fact that she doesn't panic from the undead is very helpful in certain maps. However, her lower stats and higher chance to panic from damage means she's likely outclassed by several other fighters later in the game, and is likely best left to a support role in the Shelter.

Aggro will NOT react to killing neutral survivors.