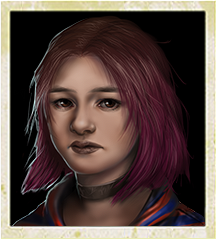 Aimee owned "The Wicked Lily", a coffeehouse/tattoo shop, together with her boyfriend, Dustin. The two barricaded themselves inside when the dead came back to life.

Aimee grew up in San Angelo and lived an unremarkable life as an aspiring artist before meeting Dustin, she quickly fell in love with his enthusiastic and creative attitude to life and was an inspiration to her. However beneath the cheery surface was a fragile psyche that broke when the zombie apocalype hit.

Note: Aimee will die if she is not recruited before Day 41 (June 2nd).

Aimee can be found at The Wicked Lilly, North-West of Splendid on Route 83. When you first meet her, she's exhausted, unstable, and pointing a gun at you. If you threaten her or try to force her out of the building against her will, she'll attack. If you speak to her calmly, she'll reveal that she and her boyfriend Dustin hid in the coffeehouse, and when it became apparent society wasn't going to recover, made a suicide pact. However, although Aimee was unable to go through with it, Dustin did, and she was forced to drag his body into another room while she hid out alone, trying not to starve. After she tells you her story, you can invite her back to the Shelter, and she'll accept.

Aimee will develop her skills in a fairly sporadic pattern, favoring Medical and Melee skills primarily, with Negotiation, Ranged, and Mechanical as backups. Her stat progression favors Agility, then moves on to Vigor and Perception.

Although Aimee has decent stats and a pretty good melee skill, her higher chances to Panic at both damage and the undead make her a less suitable member of a scavenging party, unless Soothinum is used to control any potential Panic problems. She may be more useful as a farmer or guard in the mid- to late-game.