Allies will support you in combat and keep the Shelter running - each has their own background, personality, and skills. Some allies will reveal new locations to loot. While the majority of allies are somewhat tolerant, some individuals will cause trouble. If enough allies become unhappy with your leadership, they throw you out, ending the game.

Allies can either be found at specific locations of the map, encountered while traveling, or automatically show up at the Shelter. It's not necessary to recruit allies, but generally it is beneficial to. It is also possible to kick an ally out of the Shelter after recruiting them, if so desired.

The following allies have a time limit and must be recruited before a certain expiration date:

Some of the allies can potentially be involved in problematic (usually life-threatening) situations at the Shelter. Grant White, Clifford Ghaffey and Fiona Parks are the most dangerous ones, as their associated problems will likely result in death of some other allies.

Based on their former life, each ally has different skills: Some may be good with weapons and prefer combat, others are more comfortable with building and crafting stuff. A few of them are so specialized in what they do, that they give the whole Shelter certain advantages like faster building, bigger weekly yields from the garden, or stronger defenses. Those advantages are called Traits, and can be seen in the Allies character screen. However, nobody's perfect - and therefore there are also Traits with negative effects, such as is a morale penalty for frightening or weird behavior, disadvantages against certain foes, and a higher chance to panic. Pay careful attention to your allies' Traits, and plan your day accordingly.

Allies gain skill points differently than the player: while you gain points by achieving goals, they receive one skill point for every day they are alive, and will sink that into a predetermined character path. There are ways of influencing their perks, but not directly arrange their skill and stat points. (To see what sort of path each ally follows, check out their respective pages.)

Shelter report at the and of a day

Maintaining positive Morale is one of the major tasks the player has to do. Morale is based on Mood, which is generated by allies, and can be thought of as the sum total of good will generated by the player. It is what keeps people’s spirits up, keeps them going, and prevents the pocket society they have created from breaking down. As long as Morale is positive, the player doesn’t have to worry about people leaving, refusing to do tasks, or being difficult in the field. Certain story events, activities, and luxury items can build up Morale. Other actions such as starvation, killing an ally, or having an ally die in the field can reduce Morale.

Each ally loses Morale every day, no matter what their Mood (although higher Mood leads to less Morale drain) – even under the best circumstances, the reality of living after society has broken down takes its toll on the survivors. There are several ranges of Mood, from Good to Disgruntled, with the least amount of Morale being lost if they have a positive outlook on their survival. Mood is influenced by player actions and events that have affected the Shelter or that ally, both good and bad. It can also be raised with Special Luxury items, each ally is individually asking for. Mood is not necessarily tied to an ally's respect for the player – for example, their Mood might drop because a loved one dies – but making people hate you is not going to do wonders for their Mood and the Shelter’s Morale. Bad Mood may even make an ally more desperate and therefore more likely to either do something dangerous or stupid, such as protesting work for the day or even committing suicide. Generally, the more their Mood drops and Morale becomes negative, the more likely it is that they will be both unhappy with your leadership and more willing to do something about it.

You can see the Mood of each ally on the Goals screen (entered by pressing "g" on your keyboard) and the morale at the end of each day in the Daily Report. 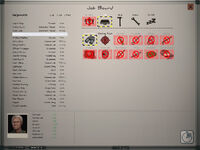 Depending on their personal skills, allies may perform different jobs at the Shelter, like building new upgrades, crafting ammunition, cooking, maintenance, garden tending and so on. Those can be assigned at the Job Board in the cafeteria. Other activities - like recreating and healing - can be attended by any ally, no matter his or her skills, and reoccurring jobs are assigned semi-permanently to an ally. They will do this job until you tell them to do something else.

Sometimes an ally will tell you that they can't work that day, because of some more or less serious problems: sickness, depression, or low Mood. While you have standard response options you can offer regardless of your skills, depending on your Leadership and Negotiation levels, you may have different options to respond to such a request - you can give them the day off, send them to work anyway, or possibly make a compromise to let them pay off the debt the next day. Keep in mind that your reaction will influence this ally's Mood. Allies can also be unavailable for jobs for a long time, because they've been assigned to do a special task, previously made a deal with you, or because they have a disability.

Allies (and you, with the Player Infection mode) can get infected during combat, and then need daily antibiotics to keep the Infection from claiming their lives: if they're without them for three days, they die. (Most survivors will ask you to put them down before they turn, but some will take the initiative to "solve the problem" on their own, so to speak.)

Of course, this is not the only way to die in Dead State. The undead could eat them, other survivors could shoot them, and they could even commit suicide or get murdered by another ally.

The moment you start to like an ally might just be the moment before a bullet hits them right in the head, so watch out.

Brian Doublebear was a temp character in Dead State's pre-Update #3 Early Access. His portrait and model are borrowed from Lloyd McCroskey.