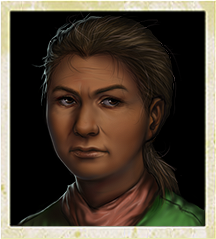 A former big rig driver, Anita was on her way back from picking up her daughter Renee from graduate school in Baton Rouge and attempting to drive back to her home in Taos, New Mexico. Blocked roads, detours, and a lack of gas nearly doomed them, but Davis answered her call for help on the CB radio and guided them safety to Splendid.

Anita is one of the initial survivors you meet when you awake at the Shelter.

Anita's skill progression focuses heavily on Melee, Mechanical, and Survival, and gradually picks up the occasional point in Medical, Leadership, and Negotiation (but none of them will go above 6). Her stat gain is Agility, Strength, Vigor, and Perception.

Anita is a melee-oriented character specializing in hammers, and can be invaluable in the first weeks of the game when it comes to combat. However, using her in the field too often could upset her daughter Renee if she comes to harm, so she's best swapped out as a member of your scavenging "B" team when you get some stronger characters in the Shelter. Another weakness with Anita is she cannot reach 10 strength which prevents her from bringing the full potential of the unique sledgehammer