Edit
This page is a candidate for deletion.
Reason: "Obsolete, Lloyd McCroskey got another complete page. Info from this page could be copied to "Trivia" on his page." 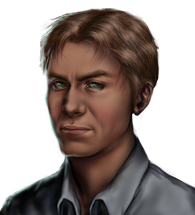 A potential sub-leader in the shelter, Brian is seen during the Crisis Event in the KS video, but doesn't say anything, although apparently he disagrees with the decision made by the player.

Brian has been used as a temporary stand in for the player character during demos. During the PAX demo video, it is said that Brian's plane crashed and that two weeks later he woke up in the basement of a school with only a few other people, although this probably refers to the player characters background and not Brian himself.