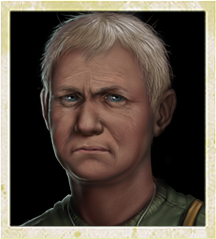 Olaf "Bud" Larsen served for two tours in Vietnam, but soon grew disillusioned with the military and returned to get married and start a family. When the world ended, his old instincts kicked in and made him a natural survivor.

Bud can be found in the Old Neighborhood south-west of Splendid on Route 377. When you first encounter Bud, he's holed up in his house, exhausted, paranoid, and not excited to see you break into his home. If you're patient with him, you'll learn his wife was bit while trying to help others, and after she died, he kept her in the basement. If you convince him the best way to honor her memory is to come with you, he will put his undead wife down before coming with you.

Bud's skills mostly focus on improving his already-high Ranged and Survival skills, although he occasionally gains a point in Medical, Melee, and Leadership. His stats focus on Agility, Perception, then Vigor.

A must have, Bud is near the Shelter and has an excellent Ranged score for how early he can be recruited. Give him a rifle (save some of that ammo for the Shooting Range upgrade!) and watch him pick off both zombies and looters before they can get close.