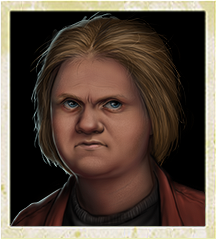 Clifford Ghaffey is a former employee at a Bullseye Department Store who was told to hand out emergency supplies when things got worse. Instead of handing them out, he locked himself in and didn't let anyone inside the market.

Clifford can be found at the "Abilene Bullseye", south of Abilene. He's upset that you broke in, and demands to come with you if you don't volunteer to take him. If you refuse, he'll attack you.

*Spoilers* Clifford can be a time bomb. Unless he's kept carefully in check, his bloodlust and sense of self-importance will grow to a point where he will become potentially unmanageable. If you want to try and keep him in check, be sure not to encourage his creepier comments and aggressively shut him down if he steps out of line.

Clifford has a near-total focus on developing his Ranged and Melee skills, with only the occasional point invested in Survival, Medical, and Leadership until late in his skill cycle. His stat upgrades are first Strength, then Perception.

While he has a decent Ranged score, Clifford is most notable for his lack of morality, and can join the player to raid neutral camps without incurring a morale penalty. While his traits make him difficult to deal with for other survivors, his viciousness in combat may make up for it if you're in a bad spot.

Clifford will NOT react to killing neutral survivors.