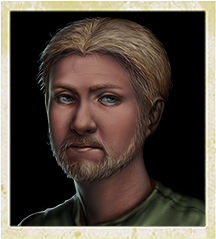 Craig Sullivan used to be a lab technician at a hospital before things fell apart. He's in a relationship with Karen Landey and they both escaped a riot resulting in a horde attack at their last shelter.

Note: Craig and Karen Landey can only be recruited before Day 25 (May 17th).

Craig can be found together with Karen Landey in a place located south of Route 190. To reach the aforementioned place the player must simply travel from Splendid Shelter to Lampasas Shelter and a message reporting two people at sight will be shown nearly the end of the way. After encountering Craig and Karen, the place will be erased from your map.

When meeting Craig and Karen, you can either attack them (they can't put up much of a fight, and don't really have any supplies), tell them to keep walking, or invite them back to the Shelter. They'll give some details about the Lampasas Shelter they escaped from - and Craig dodges a question about having Karen see a doctor - and you'll be able to ask them to come back with you.

Craig's skill progression focuses a bit widely at first, but focuses soon on alternating a focus in Science and Medical with Melee, Survival, and Ranged skills. His stats are Strength, Vigor, Agility.

Craig shines in mid-game as one of the few Science oriented characters, but suffers in early game due to his lack of Mechanical skill. Until the Lab upgrade is built, Craig is best suited for other Shelter-based jobs such as fence repair or custodian. His naturally high stats for melee allows him to fight quite well against enemies however and has enough medical skills to act as a backup medic in battle. His high science also means he can immediately use weapon poisons to inflict additional damage.