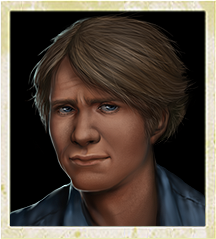 Davis Cray is an influential member of the shelter, and serves as an organizer for the Player. When he was young, he was involved in a car accident which resulted in his mother's death; there he was rescued by a fireman, and from then on, he developed a devotion to that job. When he grew up, he joined the firefighters, but in a rescue mission a beam fell and crushed his spine, paralyzing him from the waist down.

Before the world ended, he worked at the School in the library. When the town was evacuated, the Splendid police force made the school their base of operations. After using his role as a radio operator to rescue Renee and Anita, he heard the distress call from the crashing plane, and sent Vic, Joel, and Sheriff Reinhart to find survivors - resulting in group picking up Elaine, Doug, and the Player from the wreck of the airplane.

Davis has a daughter who may or may not be alive. Because of his condition, he cannot leave the School. Davis is your "Handler" for nearly all of the events in the game, and is available to offer balanced and well-thought-out counsel, doing his best to keep a positive attitude (and occasionally wry sense of humor). He acts as the arbiter for decisions for Crisis Events, notifies you of visitors at the gate, and brings up important issues with you. As the only remaining employee of the Splendid Public School, he does as best he can to help keep things running smoothly, despite his disability.

Davis is one of the initial survivors you meet when you awake at the Shelter.

Although Davis can never go out in the field, his skills develop in sporadic but helpful ways, putting points periodically in Negotiation, Mechanical, Science, and Leadership. His stats focus first on Perception, then Strength, then Vigor.

Since Davis can never go outside the Shelter, it's pretty much a given that he's going to stay inside and work on tasks. However, his can-do attitude and good starting ranks in Mechanical and Medical ensure that he's able to offer a helping hand on many important tasks.