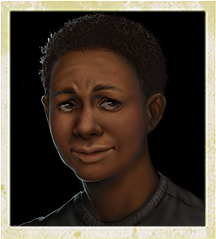 Effrem Montague is a former con artist who's naturally suspicious of people, and whose abrasive attitude might rub multiple people at the Shelter the wrong way.

Effrem got into the con artist life after the first time he went to prison for being at the wrong place at a wrong time. After he got out business he began working as a conman, scamming many people but refused to hurt others. He was able avoid justice when the zombie apocalype hit and his luck allowed him to escape. He had a run in with Vic Castillo several years back when he was working in the city.

Effrem can be found in a random encounter on the map, taking goods from an abandoned house. To recruit him, be non-hostile, and offer to let him join the Shelter. He'll be skeptical, but even if you don't have access to the special dialogue options (Negotiation or Leadership 4 or greater), he'll be at least willing to come with you "on a temporary basis."

Effrem's stats focus first on Mechanical and Negotiation, but eventually he starts to pick up some Melee, Medical, and Survival skills. His stats advance on Agility, Perception, and Vigor.

Effrem has low strength and melee but high mechanical and very high Perception and Agility, making him an effective lockpicker while the rest of the party does the fighting. Keep him in the Workshop until his combat skills improve and he can contribute more to the team: his personal credo against guns keeps him from picking up any points in Ranged, however, so don't count on him being good with firearms.

Effrem will NOT react to killing neutral survivors.