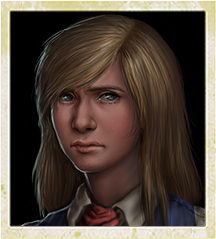 Elaine was a flight attendant on the plane that the PC and Doug were on when it crashed. One of the passengers got infected and began attacking people, and Elaine tried to get the pilot's attention to let them know about the issue. When the pilot opened the door for her, he was bitten, and the plane crashed in Texas, leaving only Elaine alive with two unconscious passengers. She starts the game in an almost catatonic state of PTSD, but through dialogue with the player, she opens up more. It is also possible to encourage her suicide.

Elaine can either become a workhorse around the Shelter, or the Counselor for the allies.

Automatically recruited, but begins the game with the uncooperative status. Through dialogue, the player can ease her guilt about the plane crash and unlock Elaine as a usable character.

Elaine gets the biggest bonus to her skills via her early Trait direction, but aside from that, her skills develop in varied directions, but primarily Medical, Mechanical, Survival, and Ranged. Her stats focus on Vigor, Strength, and Agility.

Depending on how you select Elaine's perks, she could either be a decent fighter or a helpful counselor. While she doesn't have a high pain threshold, her tolerance for the undead is middling, making her a good B-list companion for supply runs, even though her low Strength limits her carry weight somewhat. As a counselor, Elaine builds her Negotiation skills quickly, and her daily Morale boost can be especially helpful on rougher weeks in the Shelter.