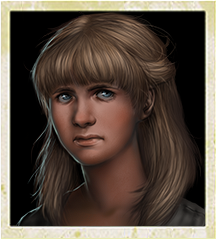 Fiona Parks is a determined young woman who was robbed by looters when she had a car accident, but managed to get her stuff back. Unfortunately they saw her leaving and hunted her down.

Fiona was born in Shreveport, LA as an only child. Her initial upbringing was a happy one with loving parents who cared for her, her father was a military man and taught Fiona many practical trades while her mother taught her to be a ladylike woman. However when her mother left her when she was only 9, her father entered a slow depression that ate at him before his botched suicide when she was only 15 years old and Fiona took care of her father until he passed away 3 years later. Her life was unremarkable until the apocalypse hit and she was stricken by a new string of disasters.

Fiona can be found at "Friendly Fred's", east of Abilene on Route 20. When you encounter her, she'll have locked herself in the house portion of a home/store, with violent looters ready to break down the door and kill her. At your appearance, they'll switch targets and attack you.

After the looters are dead, the door between the home and the store is unlocked, and Fiona will thank you for saving her. You can force her out of the store, press her to get the whole story of how she ended up there, or allow her to come with you.

Note that she will not appear until the looters are dead - merely leaving them bleeding out on the floor is not enough.

Note: Fiona will become psychotically obsessed with the player character due a traumatic childhood and the recent chain of events. Depending on the choices made through dialogue interaction and how much she trusts you (i.e. her obsession), she may end up killing certain Allies or herself.

Fiona leaps around somewhat in her skill gain, picking up points first in Medical, Mechanical, and Survival, then secondary collections in Ranged, Negotiation, and Leadership. Her stats gain in Vigor, Perception, Strength, and then Agility.

Fiona is a gamble - she can become a mainstay in the combat team or a workhorse at the Shelter, depending on how the player's relationship with her goes. However, her unstable personality may have other consequences.

Fiona will not react to killing neutral survivors.

There seems to be a bug where fiona might not spawn at Friendly Freds. Happened on Day 58 with Clifford Ghaffey freshly recruited (and not yet brought back to the base). On reload, without Clifford, Fiona is there.