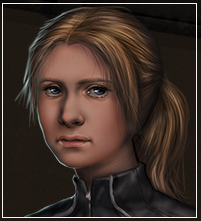 Gillian DeVries is a potential ally in Dead State. She can be found inside "Simon's Used and Rare Books" at the Austin Outskirts location.

Gillian is a shy young woman who was one of few people who remained inside Austin when it was evacuated. When a mercenary unit meant to take over protecting civilians rebelled and killed their military supervisors, Gillian went into hiding in the bookstore where she once worked, doing her best to survive and stay out of their way.

Gillian DeVries can be recruited as an ally only after obtaining the Antique Lighter from Keyes on the hotel roof. With a Negotiation skill of at least 8, she will reveal a ladder in the alley next to her location. The ladder will provide entrance to the hotel, bypassing the mall altogether.

Gillian focuses closely on Survival, Mechanical, and Medical skills, following up with Science and Negotiation. Her stats build in Perception, Agility, and Vigor.

Despite her helpful skill combo of Survival/Mechanical/Medical, Gillian's very low damage threshold makes her somewhat risky to keep around in dangerous areas, although her high Agility might make her a valuable ally in low-risk situations where heavy hitters (and those with better carry-weight) can protect her. Other than that, her scavenging traits make her a valuable asset inside the Shelter itself.