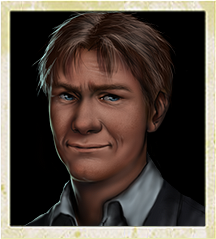 Grant is a man with a strong will to survive and isn't afraid of doing things others might condemn. He's likely to give advice that focuses on giving the absolute best odds of survival to the PC and himself, no matter what the cost might be to others in the Shelter.

Grant was a typical upper class citizen. Working as an loan officer, his clients have been made up of desperate people who asks for a loan from the bank. Years of working under a cynical financial environment created the current mindset that Grant adheres to adamantly. When the zombie apocalypse hit, his wife was bitten after failing to save his daughter and seeing the same pitiful desperation he saw in his clients murdered his wife. Leaving behind his home he has avoided death and retribution by scavenging on those who cannot help themselves or seeks some savior to save them.

Grant can be found at the "Cheery House" random encounter. While he seems very eager to negotiate and talk things through, you can mention the dead couple in the bedroom as being suspicious - Grant will assert that they killed themselves, and will point out that he can't prove his innocence any other way than by giving you his word. You can come back and recruit him so long as you do not actually speak with him.

Grant's concern for both combat and being agreeable will dominate his early skills, resulting in a strict focus on Negotiation and Melee - after this, he'll concentrate on Survival, Medical, and Ranged. His stats will gain in Strength, Vigor, Perception, and Agility.

Although he's not a top-shelf fighter, with a bonus to using axes and decent survival skills Grant can hold his own in the field. He's agreeable on the surface, but his tendency to always know exactly what he needs to say to get what he wants could conceal a darker side to his personality.

Grant will NOT react to killing neutral survivors.