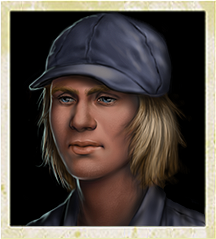 Jodie Hopkins is a mentally challenged young man with savant-level aptitude for cars and car mechanics. When the outbreak started, he was working in a garage outside Splendid. Jodie was told by his employer, Mr. Carmichael, to stay at his workshop until he's back with help. Due to Jodie's a mental issue, this seemed to be the best for him, but Mr. Carmichael never made it back.

Jodie can be found at "Carmichael's Garage", east of Splendid on Route 190. He'll follow circular logic, but if you ask him to come work for you and be persistent, he will eventually come along.

Jodie's severe autism prevents him from developing any skills other than Mechanical - his Vigor stat will improve, but nothing else.

Jodie and his skills are absolutely wasted in the field - keep him occupied in the Shelter, preferably in the Garage or the Workshop. However, his mechanical skills can be an asset in opening locked doors if you do not have any other survivors and planning to do a scavenge run. In addition, he has few morale improvement opportunities and the only way to truly raise his mood is through Todd and the Relaxation room.

Because he doesn't really understand death, Jodie will not react to killing neutral survivors.