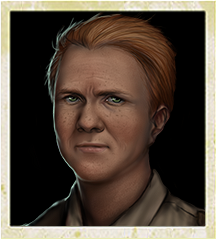 Joel is a police deputy who is encountered early in the game and is one of the ally characters the Player starts with. During the outbreak in Splendid, he was helping with the town evacuation - looking for people who might not have gone to the state emergency shelters. After rescuing the player, Elaine, and Doug, Sheriff Reinhart and Deputy Vic Castillo left Splendid looking for backup - leaving Joel to manage the School.

Friendly, awkward, and maybe a little slow on the uptake, Joel is nonetheless eager to help however he can.

A fresh off the force deputy who came here with a girl who he had fell in love with. Dropping out of college for her, his girlfriend broke with him and left him with the bills. With few options in Splendid he joined the police academy and became the only three law enforcers of Splendid.

Joel is automatically recruited when the Player arrives at the school.

Joel focuses on his combat skills first (Ranged, then Melee) with a side of Negotiation, and the occasional point in Medical and Mechanical. His stats will follow Vigor, Perception, and Agility.

Joel has the best Ranged score for the early game, and his skills advance at a decent rate, but as you get more combat-focused characters, he may be best-suited for Shelter work (or your B-team) in middle-to-late game.