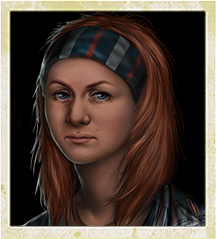 Karen Landey was an AirResponse pilot and flew a helicopter for a medical response team. She's in a relationship with Craig Sullivan and they both escaped a riot resulting in a horde attack at their last shelter.

Note: Karen and Craig Sullivan can only be recruited before Day 25 (May 17th).

Karen can be found together with Craig Sullivan in a place located south of Route 190. To reach the aforementioned place the player must simply travel from Splendid Shelter to Lampasas Shelter and a message reporting two people at sight will be shown nearly the end of the way. After encountering Craig and Karen, the place will be erased from your map.

When meeting Craig and Karen, you can either attack them (they can't put up much of a fight, and don't really have any supplies), tell them to keep walking, or invite them back to the Shelter. They'll give some details about the Lampasas Shelter they escaped from - and Craig dodges a question about having Karen see a doctor - and you'll be able to ask them to come back with you.

*Spoilers*
After a couple weeks, Karen will mention that she is pregnant, and that she wants an abortion.

If you ended up killing Craig (i.e. he threatened you after being bit), Karen will confront you about your actions. If you say he asked you to kill him, she'll receive a Mood penalty. If you say he attacked you first, she won't believe you - if you say you acted on instinct, she'll receive a Mood penalty and say she doesn't know if she can stay. If you have a Negotiation skill of 8 or greater, you can lie and say he wanted to attack her. However, she knew him better than that, and she'll deny it.

Karen focuses on Ranged, Medical, and Mechanical skills at first, then gains the occasional point in Leadership and Science. Her first stat gain in Vigor, but thereafter focuses on Perception.

Karen has good Ranged skill and can be a solid choice for taking into the field, but in combat she can be outclassed by more specialized characters such as Vic or Bud. She is a good mechanic and has the unusual skill of being able to pilot a helicopter.