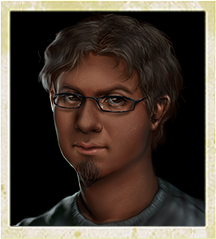 Lane Vibesit is the DJ of the KHCK radio station, which the player is able to hear from the beginning through the radio in Davis' office.

Lane went down a long line of odd jobs trying sustain his hobby of collecting indie band music and being swept aside by female indie bandmates who reject his advances. This habit has created a pessimistic mindset that worsened after the zombie apocalypse as he was forced to flee to a radio station where he provides a link to the people of the outside world as they pessimistically talk of their plight. But for Lane, he already knew the outcome was the end of the world is here and there is nothing anyone can do to make it better.

Lane can be found at the "KHCK Radio Station", west of San Angelo. NOTE: you need to find him before Day 51, or he will have left the station. Aggro can be brought along for additional dialogue and makes it clear he is to be kept on a tight leash

Lane pours a lot of points into Negotiation at first, then switches his skill-building focus frequently after that, building up Medical, ranged, Science, Mechanical, and Leadership: he won't pour a lot of points into a single skill after the initial chunk, but gains points in them across the board. Stat-wise, Lane's first two stat points will go into Perception, then Agility.

If you can find him early, he's a decent combat character in the late game but is better used as a source of morale by not working at all.