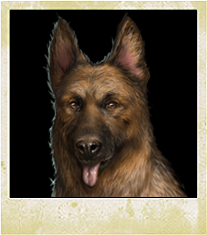 Lightning is one of the two recruitable dogs in the game. Although eager, Lightning is a little younger and less experienced than Pepper and can only perform some basic tricks.

Lightning shows up at the Shelter's gate on Day 22. The player can choose to chase him off, or take him in.

Lightning, like the other animals, does not advance any stats or skills over time.

While in the Shelter, dogs can help with Guard Duty, but aren't able to work any other jobs. Although dogs are unable to use any armor or weapons and are vulnerable to damage, they have more AP than any other character, making them highly mobile. In addition to this, they will warn the player when unseen enemies are nearby. Their Bark attack can be used to draw out enemies, and they can knock down armored enemies to make them an easier target for other allies.

Lightning can carry items in his inventory (just not use any). Lightning will always be content.