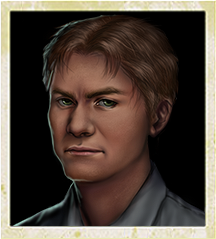 Lloyd McCroskey is a very experienced pilot who used to do dangerous transport jobs for politicians as well as for local warlords and gangs in the past and has the smarts to notice trouble before it starts. He was in Cairo at the beginning of the Outbreak and made his way to Texas by chartering a plane. 'Lloyd' isn't his real name - and he'll never tell you what it really is. Lloyd is amoral an has a strictly mercenary approach to life and despises people with righteous personalities who he finds hypocritical.

Lloyd and Todd are also the only Subleaders who won't challenge you for leadership.

Lloyd can be found at Hamilton Airfield, south-east of Stephenville, after the radio mentions a plane on Day 26.

Lloyd's skills start with him maxing out his Melee, then moving on to Leadership, Medical, and Survival - slightly later on he'll work on upping his Ranged and Mechanical skills. His stats advance in Vigor, Strength, and Agility.

A mysterious man-for-hire with top-notch skills, Lloyd makes a valuable addition to the combat team and he is able to fill almost any role working at the Shelter - If you can pay his price. His blunt, mercenary outlook can lead to conflict with strongly moral allies such as Vic or Paul. His high agility allows him to make excellent use of fast weapons such as knives or revolvers.

As far as his starting stats go, Lloyd is the best ally in the game, especially for taking out in the field. For those skills he has to charge. After the recruitment, he'll stay in the shelter but will be unavailable for any assignments. In order to use him, the player has to talk to him in the morning and offer him a payment for his service during this day. Lloyd's daily fee is a bag of whole grain coffee or 5 rations of food (3, if you have the negotiation skill to bring it down).

Lloyd will NOT react to killing neutral survivors.