Revision as of 16:30, 15 April 2019 by MeritCoba (talk | contribs) (Updated the cowardly looter)
(diff) ← Older revision | Latest revision (diff) | Newer revision → (diff)
Edit
This article is a stub. You can help Dead State Wiki by expanding it. 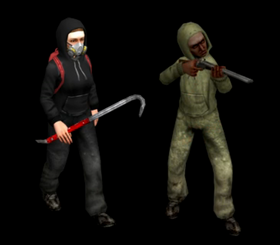 Is it not ironical that the first human enemies that you run into are looters, just like you? How convenient then in that they are hostile from the get-go so you can kill them with a clear conscience? But what if you had been confronted with places where nothing was left to loot because others had cleared them out already? And yours are dwindling, you will soon be eating crumbs and rats and insects. Will you go hungry or will you take what you need?

But well, this game has nothing like that and what looters you meet are almost all hostile and can thus be killed without remorse.

Looters are the easiest of live enemies and usually armed with makeshift or low-grade close combat weapon like crowbars and screwdrives, weak ranged weapons like the snubnose hunting shotgun and no or weak armor.

1 The Starved Soldier ought possibly to be listed with the Rogue Military, however several things speak against this. One is the poor equipment, another is the lack of dogtags and the final is that the Starved Soldier is encountered with other groups of looters instead of with rogue military. 2 The Looter Thug might be eligible to be listed on the Thugs page, however Thugs seem to be melee fighters. Also the Looter Thug is encountered with other Looters. What speaks against it is that the Thug is well armed for a Looter making it one of the more dangerous Looters.