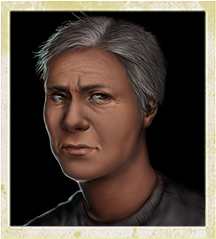 Mark Corbeau was in the same evacuation group as Michiru Yata and Ryan Michaels. After escaping an attack by a horde he decided to take care of them and led them into safety. He used to work as a chef before everything went down among other careers.

Mark can be found together with Michiru and Ryan at a "Truck Stop" South of Splendid on Route 87. He will be guarded at first, but if you're civil, he'll tell the others it's all right, and they'll come out of hiding. Mark will only agree to come with you if you agree to take all three of them in.

Mark keeps a strong focus on Science, Negotiation, Mechanical, and Medical skills. His stats advance in Vigor, Agility, and Perception.

While Mark can eventually serve as an emergency Melee character, his lack of points in combat skills makes him better suited to raising Morale when assigned to the Chef job. If he's needed in the field, however, his Razor Edge trait raises his accuracy enough to make him a decent second-stringer in combat.