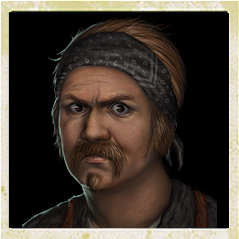 Marshall Streeter is the new leader of the Coyotes - after killing Regina's lover and co-leader, NZ, and causing Regina to flee for her life. He rules the Coyotes like a savage warlord, with his favorite yes-man Sweaty Dave at his side.

Marshall is a violent, vicious psychopath: a man who can keep only a basic veneer of diplomacy for only as long as it doesn't bore or upset him. Once his eye falls on the Shelter and its inhabitants, it's bound to end badly.

Marshall may not be the biggest or meanest character in the game, but he's got a lot of Strength and Vigor, and his Melee skill is pretty terrifying early on in the game. He's got a Sawed-Off Shotgun in one hand and the named weapon Mr. Stabby in the other. The one thing he doesn't have, however, is any body armor - so if you're able to fight through his goons and make it up to his room in the second floor of the Coyotes' hideout, be sure to hit him with everything you've got.

Note: Defcon soldier equals to Sweaty Dave be sure to bring a full loaded Ms4