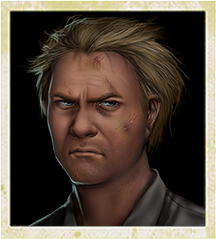 Max Getz is obsessed with killing the undead and likely to frighten other survivors with his behavior.

Getz arrives at the Shelter on the morning of Day 6, covered in blood and on the brink of collapse. Even if you don't want to take him in, Davis will insist.

Getz is single-minded in his skill build at first, focusing on Melee and then Survival until they're maxed. After that, he'll gain smaller chunks in Leadership, Medical, and Mechanical. His stat gain is in Vigor, Strength, and Agility.

If you can keep him happy enough, Getz can quickly become a permanent addition to the combat team. His high melee and strength make him deadly in combat, but keep plenty of sleeping pills on hand and build the Gym ASAP. If Max has his hand on a hard hitting melee weapon like the Railroad Hammer, he will excel at slaying Zombies, as most of the time he will often oneshot zombies with it, no matter from what direction it is used from with often guaranteed chance that it will hit. Plus it is also very useful against certain more stubborn human survivors if he gets close.

Getz will NOT react to killing neutral survivors.