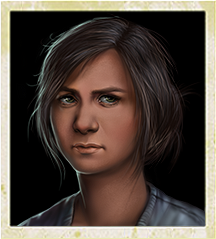 Melina Guzman married Oscar Guzman about a year ago and moved to the US in the process. She tries to improve her English skills, but it's still not great, and significant communication with her is only possible through Oscar.

Note: Melina and Oscar Guzman will die if they are not recruited before Day 29 (May 20th).

Melina Guzman can be found in a pharmacy in "Downtown San Saba, northeast of Splendid (on Route 190), together with her husband, Oscar Guzman. You must have either a Medical skill of at least 4, a Negotiation skill of at least 3, or Renee Cass in the party to recruit them.

Melina focuses her skills on Mechanical, Science, Medical, and Negotiation at first, picking up some supplementary points in the other skills later in the game. Her stats focus on Perception, Vigor, and Agility.

Due to her "Below Fluency" trait - and her low combat skills - it's wise to keep Melina out of the field (not to mention that her Infected status guarantees she'll turn if killed in combat). She spend most of her time working on projects around the Shelter with her high Mechanical score, particularly the Workshop once it's been constructed.