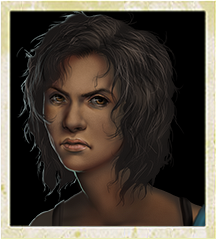 Mia Seza is one of Sara Seza's sisters. She seems to be the black sheep of the family, because unlike her sisters she's rebellious and didn't reach their educational level.

Mia and her sister Sara can be found at the Pleasant Oaks Summer Camp, north of Austin. You have several ways to get them to join:

Mia's very single-minded initially, immediately maxing out her Melee skill before skipping between Medical, Survival, and Mechanical. Her stat gain is in Vigor, Strength, and Agility.

Mia can be a good addition to the combat team when using a club, but has issues around the Shelter which may make her difficult to use consistently.

Mia will NOT react to killing neutral survivors.