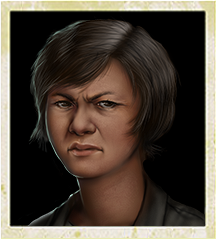 Michiru Yata was in the same evacuation group as Mark Corbeau and Ryan Michaels and was saved by Mark together with Ryan. She is a Japanese doctor and does not speak English.

A single mother of two kids Yukari and Kenji, who she left back in Japan for a Doctor's Conference in Texas when she became part of Mark's group when the apocalypse hit.

Michiru can be found together with Mark and Ryan at a "Truck Stop" South of Splendid on Route 87. Mark will be the only one visible, and will be guarded at first, but if you're civil, he'll tell the others it's all right, and they'll come out of hiding. Mark will only agree to come with you if you agree to take all three of them in.

Michiru immediately maxes out her Medical skill, then quickly puts points in Science and Negotiation, and finally Mechanical. Her stat gains focus on her Perception, Vigor, and Agility.

Unable to contribute to the Shelter at first due to only speaking Japanese, she is best recruited early on. If a month of Ryan's time is invested in teaching her to speak English, she is unlocked and can be used as the best doctor in the game. With access to the right tools, her formal medical training allows her to treat patients with long-term status effects more quickly than any other ally.