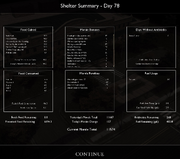 Mood is a type of game mechanic in Dead State. It represents how a character is feeling, and has a direct impact on shelter Morale.

Each ally loses Morale every day, no matter what their Mood – even under the best circumstances, the reality of living after society has broken down takes its toll on the survivors. There are several ranges of Mood, from Happy to Disgruntled, with the least amount of Morale being lost if they have a positive outlook on their survival. Mood is influenced by player actions and events that have affected the Shelter or that ally, both good and bad. Mood can be improved by giving characters special goods that they ask for, such as deodorant or sleeping pills (goods found in the Unique Items section of the Inventory/Shelter Storage). Mood is not necessarily tied to an ally’s respect for the player – for example, their Mood might drop because a loved one dies – but making people hate you is not going to do wonders for their Mood and the Shelter’s Morale.

Players can see their ally's mood. If they are in a Good mood, then they are only losing -1 Morale a day, which is not hard to compensate for. Worse moods lose more Morale per day. You don't know what their actual Mood score is, you just know that they seem to be "Good". (Note: In the final version of the game, the only place you see "Good" mood is the end of day report-here Good refers to characters with a "Happy" mood. There is no mood with -1 Morale loss now, all Morale loss is noted below. You can always see what mood a character has in the Goals Screen.)

Lower Moods may make the NPC more desperate and therefore more likely to either do something dangerous or stupid. Like panic in battle or even commit suicide, for example

Keep in mind that someone can dislike you and still have a positive Mood, though you will probably know what they think of you from their dialogue tone or previous dealings with them.

Generally, the more their Mood drops and Morale becomes negative, the more likely it is that they will be both unhappy with your leadership and more willing to do something about it. Depending on the mindset of the survivor they will threaten to leave, force you to execute them or leave on their own volition without saying a word.