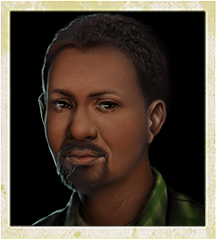 Nathan Harris is a real estate agent who got trapped in Texas after driving down to look at a boat he wanted to buy. In his spare time he used to go hunting, camping, and fishing on the weekends to get away from the city. As a result, he has pretty good survival skills and is especially good at fishing.

Note: Nathan will die if he is not recruited before Day 41 (June 2nd).

Nathan can be found in the church at Menard Graveyard. He should be willing to come with you without much convincing.

While he makes a good addition to a foraging team along with Survival experts like Bud or Priscilla, he can be a lifesaver when the Shelter is running low on food. With a fishing rod and enough time at a lake, he can generate impressive amounts of fresh food.