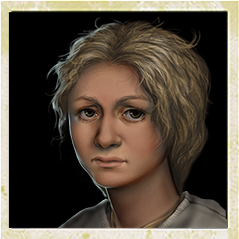 Parisa is an immunologist who worked for the Center for Disease Control. She was investigating a hot zone, when her convoy was attacked, forcing her to flee - a path that eventually put her in the hands of the Texas Sons of Liberty. The Militia believe her organization caused the undead plague and is able to cure it.

Parisa is only recruitable after attacking Militia HQ.

It is possible to recruit both Parisa Sharazi and Ken Nash in the following way:

Parisa will immediately max out her Science skill, and pick up some points in Melee and Leadership before nearly maxing her Medical skill as well. Mechanical is her tertiary focus, although she'll pick up points in Negotiation and Leadership as well. Her stat gains are in Vigor, Strength, Perception, and Agility.

One of the few scientists in the game, should be put to work in the Laboratory making items and antibiotics. If you're desperate for another B-lister in the field, her skills could be potentially converted, but she's likely best indoors than out. Where her attacks don't hit hard, her high science skill allows her to use contact poisons to augment her club attacks, allowing her to deal additional damage against human NPCs and her medical skills lets her be of use as well.