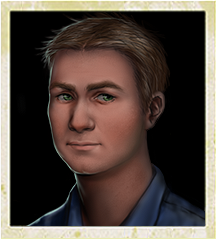 Paul Rainier is a former Army Ranger who was honorably discharged because of his sexual orientation due to rivalries in his unit led to him being exposed as a gay, he became an engineer traveling across the rural areas setting up cell towers over the allure of easy money as a mercenary. He and his boyfriend Raph were in Corpus Christi for business, trying to get back to their home in Colorado, until Raph fell asleep while driving and died in the following accident. Paul is a morally centered man who believe in doing the right thing, even after his experiences in the military suggested otherwise.

Paul is one of the six Subleaders at the Shelter.

Paul can be found at the random encounter "Car Accident". Don't be hostile, and he should be willing to join without issue.

Paul spreads out his skills evenly, gaining points in Leadership, Ranged, a bit in Medical, Negotiation, then a bit in Mechanical before maxing out his Ranged skill. His stats grow in Perception, Vigor, Strength, and Agility.

While his Mechanical and Medical skills aren't too shabby, Paul is absolute beast in combat, as he won't Panic (from either damage or the undead) and has impressive Ranged score. Give him a rifle and he can clear a room of zombies on his own.