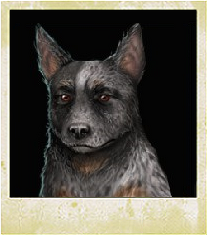 Pepper is a female attack dog and more experienced dog than Lightning, immediately recognizing the tricks that the player can choose for her to perform.

Pepper can be found in the "Scrapyard", east of Splendid on Route 281. Move through the scrapyard to the house at the back, and enter the bedroom - she'll be cowering in a corner. Be calm with the dog, and look around for something it might like - a pillow shaped like a pepper shaker. Keep picking responses that mention the word "pepper," and eventually your character will realize that's her name, and she'll be excited to follow you.

Pepper, like the other animals, does not advance any stats or skills over time.

While in the Shelter, dogs can help with Guard Duty, but aren't able to work any other jobs. Although dogs are unable to use any armor or weapons and are vulnerable to damage, they have more AP than any other character, making them highly mobile. In addition to this, they will warn the player when unseen enemies are nearby. Their Bark attack can be used to draw out enemies, and they can knock down armored enemies to make them an easier target for other allies.

Pepper can carry items in her inventory (just not use any). Pepper will always be content.