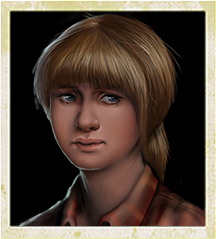 Priscilla Butler is a naive young woman who was raised in a remote rural and very religious family. After spending her whole life on her parents' farm, she ran away to visit Todd Kantell, a television preacher, when the crisis started to heat up.

Priscilla appears at the gate together with Todd Kantell on day 14. Don't turn them away, and they'll join up without issue.

Priscilla is careful to spread out her points, focusing on Survival, Ranged, Medical, and Negotiation in turns. She'll never gain an Mechanical, Leadership, or Melee points. Her stat gains are in Perception and Agility.

Although generally best used as a Farmer at the Shelter, Priscilla can be a useful addition to a foraging party with other Survival based characters.