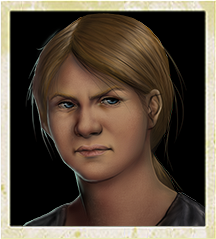 Regina is the former leader of the Coyotes Motorcycle gang, along with her lover, NZ. Her lover was murdered by the current leader, Marshall Streeter, but she managed to flee before Marshall or his followers caught her.

Regina is one of the six Subleaders at the Shelter.

As one of the two leaders of the Coyotes Motorcycle Gang Stephenville Chapter, Regina has enough run ins with the law to distrust anyone one with a badge or insignia as the gang was notorious for gunrunning and other crimes to deter even local law enforcement as they even ran guns for the Texas Sons of Liberty. When the apocalypse hit NZ and Regina organized everybody in the coyotes together to survive the zombie apocalypse but Marshall soon realize he could seize power by killing both leaders. Successfully killing NZ, Marshall took control and Regina was forced to flee. Regina is a no nonsense brute force leader who disregards the more subtle methods of dealing with disorder and prefers a head on approach to any problems.

Regina arrives at the shelter on day 25. Allow her to stay (begrudgingly or not) and she'll join up.