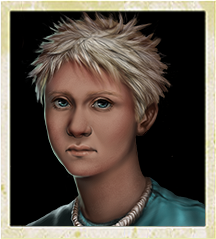 Ryan Michaels was in the same evacuation group as Mark Corbeau and Michiru Yata and was saved by Mark together with Michiru. He was on the way to evac when he and his family, as well as everyone else in the evac group, were attacked by a horde of undead. Mark, Michiru, and Ryan were still on the bus, and were helpless to stop the bus driver from taking off and leaving the rest of the evac group to their fates.

Ryan can be found together with Mark and Michiru at a "Truck Stop" South of Splendid on Route 87. Mark will be the only one visible, and will be guarded at first, but if you're civil, he'll tell the others it's all right, and they'll come out of hiding. Mark will only agree to come with you if you agree to take all three of them in.

Ryan is young, inexperienced, and frightened of the undead. However, if handled with patience and given time to grow, Ryan can handle almost any task in or out of the Shelter.