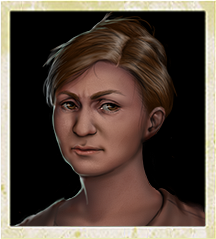 Sandy Doubleday is a rich and snobby woman, but also an experienced politician. She doesn't know where her husband is, since he's always away for business and rarely home.

Sandy is one of the six Subleaders at the Shelter.

Sandy can be found in her "Mansion", north-east of San Angelo.

Sandy will focus her skills mostly on Leadership, Medical, and Negotiation, with the occasional point spent in Ranged and Mechanical. Her stats gain in Perception only.

Sandy works best as a guard around the Shelter, since her combat skills aren't quite good enough for the field. She knows about several useful locations.