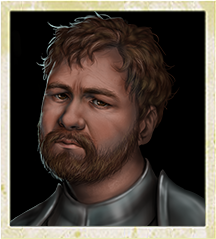 Sir Charleston believes he's a knight in a fantasy kingdom, and the undead are demons that have taken over the land. However, this is only the persona of a man living in a fugue state. Who he is - or was - and whether or not to try and bring him back to his senses is a decision for the player to make. After saving him, he tells you that he was from a gated community that caught word of the emergency shelters being full and instead fortified the gated community before it was ultimately overrun by zombies. In desperation he turned into Sir Charleston and fought his way out with his armor protecting him from zombies who attacked him.

Sir Charleston can be found in a random encounter.

The second row's figures are his stats when he is brought to his senses that he is not Sir Charleston but Carlton Harriets. Asterisk is typed after the figures that change.

Sir Charleston will focus on Melee, Leadership, and Survival, and later develop skills in Ranged. His stats will focus on developing Strength almost exclusively, with another point to max out his Vigor.

Carlton Harriets, on the other hand, focuses on Mechanical and Negotiation skills, then picks up points in Science and Medical. His stats grow in Perception and Agility.

Sir Charleston has high Strength and Vigor, but his average Melee skill and late recruitment date may make him less suited to combat than other allies. However, with his custom suit of full plate armor makes him completely immune to all zombie attacks and extremely resistant to human melee attacks, and there is no character better suited to fighting the undead.

Carlton Harriets is not well-suited for the field due to his low pain and terror threshold, but his focus on Mechanical skills can be valuable to the Shelter.

Both Sir Charleston and Carlton will react negatively to killing neutral survivors.