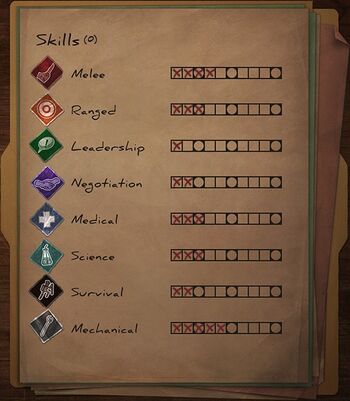 Skills are a type of game mechanic in Dead State.

Skills can be thought of as the character's knowledge base - emotional, physical, and learned knowledge. Every action in the game requires Skill checks to determine how successful the player is at achieving certain actions. There are eight Skill categories.

Skill points are used to increase skills, with more points needed for higher levels of the skill. Each skill begins at 0 and can be improved up to a level of 10. One skill point is needed for the first level of each skill. One of two Skill Perks can be selected at levels 3, 6, and 10 for each skill. Skill Perks can be active skills (such as the Kick ability gained at Melee level 3) or passive skills (such as the Survey ability gained at Survival level 3).

Stat points are granted each time a skill point milestone is reached. Defeating enemies does not yield experience, you must achieve certain goals to gain skill points.

Leveling Up and Goals2

You gain points that you can put into your skills by completing goals. Some goals are unique one-offs (e.g. Repair the Fence) while some are repeatable (e.g. collect 150 food, collect 200 luxury items etc).All skills range from 0-10 and as you reach the higher levels the cost for increasing them also goes up. For skill level 1-2 it will cost you one point a piece, two for 3-4, three for 5-7, four for 8, five for 9 and 6 for level 10. To completely level up a skill it will cost you 30 points which translates as 30 unique goals or 1500 antibiotics found.

There are 5 basic repeating goals. Each time one is fulfilled you get a skill point and the counter is reset. They are:

Luxury items have a "value" associated with them - this tells you how much they will count towards the goal. Food is measured on a per item basis so while a 10 lb bag of rice might get you a lot of rations it only counts as one item towards the goal. Fuel is measured by the .5 of a gallon (i.e. 12.5 gallons = skill point), antibiotics and parts have a one to one ratio.

These goals don't repeat. Once you achieve them you get the skill point and they're added to the list of completed goals. They are:

It is possible to completely upgrade your character by clearing the repeating goals a lot. I found that harvesting and fishing (with Nathan and Troy once you get them) can help buff your character quite quickly.

How well the character deals with close enemies (physical force)

How well the character deals with distant enemies

How well the character deals with healing the human body

how well the character can reuse elements to create new items

How well the character survives in an outdoor environment

How well the character works with items with moving (machine) parts

Skill Perks are gained at level 3, 6, and 10 of a skill. As an ally's skills increase, they gain perks as well. The player can influence what perks are received.