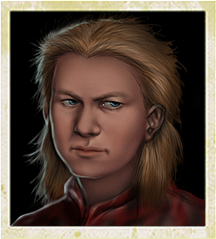 Troy Cooper was thrown out of the Texas Sons of Liberty (the militia) for getting into a fight with one of its members, and is now on his own. Despite having the brashness of youth and a solid lack of tact and education, Troy's been training in survival tactics since childhood, and those skills can potentially make him a useful ally.

In Troy's youth he struggled to fit in with the public school environment due to being the bad kid of the family. Spending his vacation days and weekends with his uncle, he became a well taught survival expert while his Uncle mixed the teachings with his sympathies towards the Texas Sons of Liberty. Sometime later his uncle took the fall and went to prison for his group and in exchange asked the militia to take care of Troy. His time with the militia ended when he got into a fight with one of the members. Despite his survivalist training, he still holds a degree of compassion and eagerness and less bigoted than other militias who wants any undesirables out of Texas.

Troy can be found in a random encounter, arguing with Filmore, second in command of the militia. If you attacked Militia HQ or any Militia members before meeting him he becomes unrecruitable. When you speak with him, don't attack or shoo him off, and he should be easily convinced to join.

Troy quickly puts points into Survival, Medical, and Ranged, and focuses on maxing out those skills (as well as putting plenty of points into Melee as well). His stat gains are in Agility and Perception.

Troy is good with both melee and ranged and has a high Survival skill, making him ideal for joining a foraging party along with Priscilla and Bud, or as part of the combat party. His high Survival also allows the construction of the Mushroom Patch.

Troy will NOT react to killing neutral survivors.