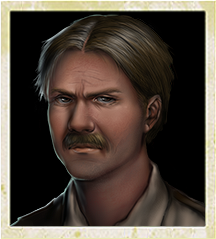 Vic Castillo is an Ally in Dead State. He is a police deputy and one of three officers in Splendid, Texas. During the evacuation of Splendid, Vic alerted the Sheriff of the eventual plane crash after Davis alerted him to the pilot's distress call. After rescuing the whoever they could from the crash site, Vic and the Sheriff left to seek help, leaving Joel Oswalt at the School with the other survivors.

Vic is one of the six Subleaders at the Shelter.

Vic will show up at the Shelter automatically on Day 8.

Vic focuses his initial skill gain on Ranged, Leadership, and Melee, then Medical, Survival, and Mechanical. His stats advance down the line - Vigor, Perception, Agility, and Strength.

An early mainstay in the party for his deadly accuracy and range with a 9mm. His Ranged skill is often the first to maximize, making him lethal in ranged combat especially when paired with Paul.