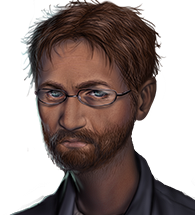 Walter Addison is a junior engineer at a power plant in Glen Rose. When the evacuation order came, he waited at the plant for weeks with his colleagues and took advantage of electric power there while the food was running out. They tried to contact other people, but couldn't reach anyone of importance, then decided to send eight people, in eight cars, to warn others that their power plant was on the brink of a nuclear meltdown.

Walter automatically arrives at the Shelter on Day 86, triggering the end-game Crisis Event. You will need to use one of your skills to talk him into staying.

There's not a lot of time for Walter to up his skills, but he immediately maxes out Mechanical before moving on to Science, and if you're around that long, Survival. His stats build in Perception only.

Being that Walter demands not to be taken outside very soon after joining, the choice of whether or not to keep him in the Shelter is somewhat moot. He is malnourished and a poor choice for taking into the field, but his high Mechanical and Science skills make him a valuable asset in the Shelter.